Dr. Lynne Curry has spent the past year immersed in researching and writing on the historical intersections of law, medicine and society, particularly as they pertain to children. In February she gave a paper entitled, “From Religious Freedom to Medical Neglect: Faith, Medicine, and Children’s Rights in the Twentieth-Century United States,” at King’s College in London.  Dr. Curry developed an essay from that paper that will be published in a forthcoming volume on religion in American life.

This statue in London’s Trafalgar Square was enigmatically titled “Powerless Structures” by its Danish creators, Elmgreen and Dragset. It’s an interesting use of the imagery of childhood to represent Britain’s rebirth after World War II. (Photo by Brandon Curry 2013. Used by permission.)

This fall she is continuing her research on that topic, aided by Ace Graduate Assistant Emily Scarbrough, and her next step is a paper for the annual conference of the American Association for the History of Medicine in the spring. Dr. Curry’s ultimate goal is to knit several strands of her research together into a monograph that traces changing medical, cultural, and legal views of children in the United States. Meanwhile, she reviewed works by other historians for the Journal of American History, the Journal of the Illinois State Historical Society, and H-Law, a listserve for legal historians; Dr. Curry also reviewed book manuscripts for the University of Massachusetts Press and Westview Press.  Finally, Dr. Curry wrote an essay entitled, “Modern Reproductions: Women, Biology, and History,” that will be published in the Journal of Women’s History.

The Latin American faculty in History, Foreign Languages, Geography and Geology, Communications, the School of Technology and others invite all History students, faculty, and the community in campus and in the Charleston area to attend the events of this year Latino/a Heritage Month. Many of these events are History related ones, such as professor Rolena Adorno (Princeton University)’s talk on the meaning of Columbus Day or the lecture on Latin America and Latino Politics. 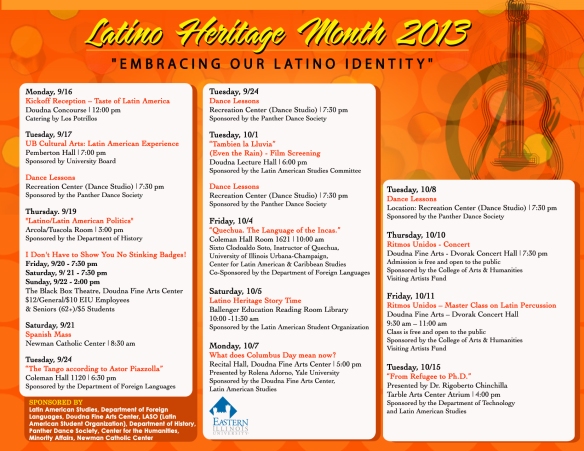 The History Department held its annual fall picnic on Saturday, September 7. In attendance were members of the faculty, graduate students, family, and friends. Special thanks to Herb and Jane Lasky for hosting us at their beautiful home!

With the America’s Cup underway, eyes are focused on space-aged ships zipping across San Francisco Bay at speeds exceeding 50 miles per hour. In a recent letter to the editor Dr. Foy pointed out  that the races provide “an opportunity to bring into focus the often overlooked history of African-American seamen.” He urged the Golden Gate Yacht Club to find a way to recognize African-American maritime heritage as part of the America’s Cup challenge.